Barack Obama, the SEIU and ACORN go way back. 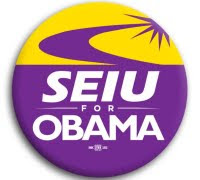 A top Obama ally predicted Wednesday in an interview with ABC News that Democrats will lose their congressional majority in next year’s midterm elections if they fail to put a health-care reform bill on President Obama’s desk.

“I think we’re talking losing control of Congress,” said Andy Stern, the president of the Service Employees International Union. “[The failure of health-care reform] would totally empower Republicans to kill all change.”

“It’s hard to imagine the Democrats convincing the public that Republicans are to blame for health-care reform going down when the Democrats have such large majorities,” he added. “After last year’s promise of change, voters will start feeling buyer’s remorse.”

Stern, who was invited to sit with the Obama family during the president’s inaugural parade, is watched closely on health-care reform not only because of the labor muscle he wields as the head of the 2-million member SEIU but also because of the effort he has made to work with business groups: in 2007, he started “Divided We Fail,” a coalition which joined SEIU and AARP with the Business Roundtable and National Federation of Independent Business to promote the general principle of universal health care coverage.

Stern did not tie his 2010 prediction to the inclusion of a public option in the final bill. He did, however, warn that dropping a public option could “unravel” support for the more modest package of insurance reforms that President Obama began emphasizing last week.

Barack Obama guaranteed today that his health care overhaul will pass and will not add to the federal deficit.
And, he said it with a straight face.