The Horror!… The absolute horror!
The New York Times reported this weekend that the CIA threatened Al-Qaeda terror leader Abd al-Rahim al-Nashiri with a drill and a gun if he failed to talk.
Abd al-Rahim al-Nashiri was the top Al-Qaeda suspect in the USS Cole bombing that killed 17 American sailors.
The New York Times wept for this terrorist thug yesterday:

A Central Intelligence Agency inspector general’s report set to be released Monday provides new details about abuses that took place inside the agency’s secret prisons, including details of how C.I.A. officers carried out mock executions and threatened at least one prisoner with a gun and a power drill.

C.I.A. jailers at different times held the handgun and the drill close to the detainee, Abd al-Rahim al-Nashiri, threatening to harm him if he did not cooperate with his interrogators, a government official familiar with the contents of the report said.

It’s strange isn’t it, how The New York Times can get so worked up over “threatened” torture and yet totally ignores real torture by Al-Qaeda? 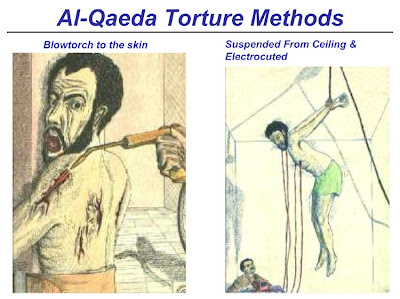 In May 2007, The Smoking Gun published a series of torture drawings that were captured at an Al-Qaeda torture house in Iraq. Nine days after the images were released, neither ABC, CBS, NBC, The New York Times nor The Washington Post ran a story with photos of the shocking evidence of al-Qaeda’s barbarism.
Funny how that works with our democrat-media complex, huh?

UPDATE: Shocker! The radical Obama Justice Department has recommended reversing the Bush administration and reopening nearly a dozen prisoner-abuse cases!
Now we can get to the bottom of these awful threats and caterpillar torture against Al-Qaeda detainees!