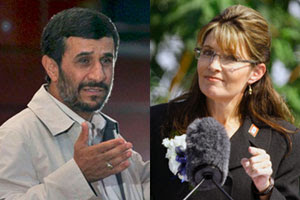 Is Sarah Palin America’s Mahmoud Ahmadinejad? The two differ in many key respects, of course, but it is remarkable how similar they are. There are uncanny parallels in their biographies, their domestic politics and the way they present themselves — even in their rocky relationships with party elders.

Both are former governors of a northwest frontier state with great natural beauty (in Ahmadinejad’s case, Ardabil). Both are known for saying things that produce a classic Scooby-Doo double take in their audiences. Both appeal to a sort of wounded nationalism, speaking of the sacrifice of dedicated troops for an often feckless public, and identifying themselves with the common soldier. They are vigilant against foreign designs on their countries and insist on energy and other independence.

That’s funny… Last month Bush was Ahmadinejad.
They really need to make up their minds.