It’s come to this.
New for toddlers– Would you buy a shirt for your baby that had nipple tassels on it? One company is hoping you will.

ParentDish interviewed the designer behind TwistedTwee, which is selling t-shirts for babies and preschoolers that include nipple tassels, among other items.

The designer, Suzi Warren, told ParentDish via email that “The Nipple Tassel t-shirt was designed as a response to my own distaste at seeing mini versions of sexy clothes on young children. Five-year-olds wearing slashed mini skirts and boob tubes, little thumb-sucking Britneys.” I guess that’s like wearing blackface to protest racism? Mostly Warren is doing it to make money. At least I hope that’s why. If she honestly believes that this is an effective form of protest, I’d hate to think what she’d do with an issue like health care reform.

And after she outgrows her tassle-T she’ll be old enough to start playing with her Pole Dance doll. 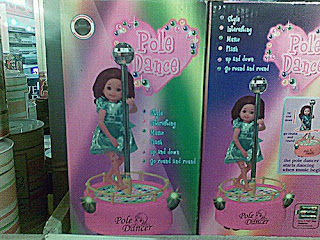 The Pole Dance doll for little girls.
What will they think of next?