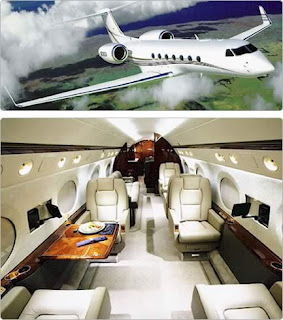 Gulfstream 550
It may be the worst recession since the Great Depression but that didn’t stop Speaker Pelosi from ordering 3 more deluxe jets for Congressional members to travel to and from Washington DC.
Roll Call reported:

Last year, lawmakers excoriated the CEOs of the Big Three automakers for traveling to Washington, D.C., by private jet to attend a hearing about a possible bailout of their companies.

But apparently Congress is not philosophically averse to private air travel: At the end of July, the House approved nearly $200 million for the Air Force to buy three elite Gulfstream jets for ferrying top government officials and Members of Congress.

The Air Force had asked for one Gulfstream 550 jet (price tag: about $65 million) as part of an ongoing upgrade of its passenger air service.

But the House Appropriations Committee, at its own initiative, added to the 2010 Defense appropriations bill another $132 million for two more airplanes and specified that they be assigned to the D.C.-area units that carry Members of Congress, military brass and top government officials.

Remember: Everyone must sacrifice.