Desmond Tutu would make a great democrat.
He hates Jews and Bush. 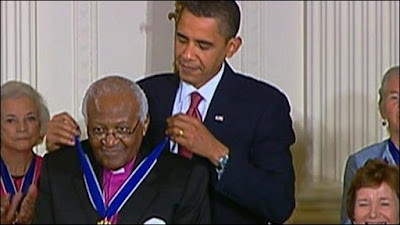 Another friend of Obama.

The lesson that Israel must learn from the Holocaust is that it can never get security through fences, walls and guns,” Archbishop Emeritus Desmond Tutu of South Africa told Haaretz Thursday.

Commenting on Prime Minister Benjamin Netanyahu’s statement in Germany Thursday that the lesson of the Holocaust is that Israel should always defend itself, Tutu noted that “in South Africa, they tried to get security from the barrel of a gun. They never got it. They got security when the human rights of all were recognized and respected.”

The Nobel Prize laureate spoke to Haaretz in Jerusalem as the organization The Elders concluded its tour of Israel and the West Bank. He said the West was consumed with guilt and regret toward Israel because of the Holocaust, “as it should be.”

“But who pays the penance? The penance is being paid by the Arabs, by the Palestinians. I once met a German ambassador who said Germany is guilty of two wrongs. One was what they did to the Jews. And now the suffering of the Palestinians.” Creepy Biden Whispers in the Mic Again... After Playing Touchie with The Kids (Video)