A woman screamed “Heil Hitler” at a Jewish man today at a town hall event in Las Vegas. 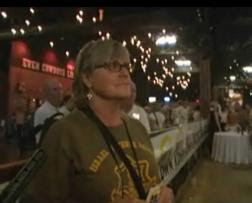 Breitbart has video.
(The woman is acting really weird though.)

Considering Obama captured 77% of the Jewish vote and anti-Semitism runs rampant on the Far Left and nutroots blogs, it’s likely the woman belongs to some democratic group and is not a conservative.
Sorry libs.