Lockerbie bomber Abdel Baset al-Megrahi was given a hero’s welcome when he arrived back in Libya. 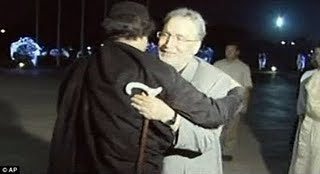 Abdel Baset al-Megrahi, (right), who was found guilty of the 1988 Lockerbie bombing, is greeted by Libyan leader Gaddafi in Tripoli. (Daily Mail)

Could it be?
Joe Scarborough asked this morning, “Did Barack Obama had signed off on the Lockerbie bombers release?”
Would America’s great ally really notify the US that they were going to release the Lockerbie bomber (who killed 169 Americans) before his release?
Media-ite reported, via HotAir:

Every cable morning show discussed the story this morning, and it continues to be seen on CNN, Fox News and MSNBC today.

“How would you feel if you were a family member of one of those people killed on that plane?” asked Fox & Friends co-host this morning, before playing a heart-wrenching clip of a father describing his son from earlier on the show.

But on MSNBC, Joe Scarborough took it a step further. After Pat Buchanan asked the question about whether the White House knew what was happening, Scarborough continued. “Anybody that works in Washington for more than a day knows the British government is not going to release a terrorist that killed American kids without getting the OK from the American government,” said Scarborough. (It wasn’t just the “right” side of Morning Joe either – Mike Barnicle said the idea the U.S. government didn’t know beforehand was “preposterous.”)

The lack of information, and the slow leak of new and explosive storylines, means the release will continue to be a major story in America.

As I blogged last week—

So, are we supposed to believe that Barack Obama knew nothing about Meghahi’s release?
169 of the 243 people killed in the bombing were Americans.
Just wondering.

So, is Meghahi really dying? There had to be some form of medical documents that were ‘supposedly’ presented to officials, so who signed them and what did they say? The British continue to say the American’s were informed of this release, will they name the names of the Americans?