Not even the HEAVY POLICE PRESENCE could keep the unruly mob from booing Reps. James P. McGovern and Richard E. Neal at a Massachusett’s town hall meeting today. 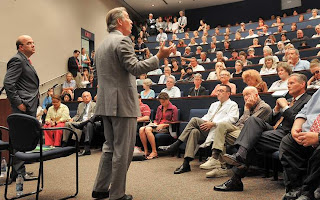 The mob was too well dressed to be ordinary citizens. (Telegram)

The two Worcester-area Democratic lawmakers were shouted down several times by people attending a packed “town hall” meeting at the University of Massachusetts Medical School.

UMass officials threatened several times to end the gathering because of the raucous behavior, which occurred despite a heavy police presence.

At one point, Mr. McGovern was likened by an attendee to Josef Mengele, the Nazi officer who performed experiments on concentration camp survivors.

Despite the generally hostile crowd, the two legislators insisted that a health care overhaul was desperately needed and that changes to the system would financially benefit all.

Hopefully, members of the Obama Snitch Squad were able to report on this mob to Dear Leader.

Jammie Wearing Fool has more on the shindig.