Just when you thought they could stoop no lower…

We believe it is healthy for such a historic effort to be subject to so much scrutiny and debate. The failure of past attempts is a reminder that health insurance reform is a defining moment in our nation’s history — it is well worth the time it takes to get it right. We are confident that we will get this right.

Already, three House committees have passed this critical legislation and over August, the two of us will work closely with those three committees to produce one strong piece of legislation that the House will approve in September.

In the meantime, as members of Congress spend time at home during August, they are talking with their constituents about reform. The dialogue between elected representatives and constituents is at the heart of our democracy and plays an integral role in assuring that the legislation we write reflects the genuine needs and concerns of the people we represent.

However, it is now evident that an ugly campaign is underway not merely to misrepresent the health insurance reform legislation, but to disrupt public meetings and prevent members of Congress and constituents from conducting a civil dialogue. These tactics have included hanging in effigy one Democratic member of Congress in Maryland and protesters holding a sign displaying a tombstone with the name of another congressman in Texas, where protesters also shouted “Just say no!” drowning out those who wanted to hold a substantive discussion.

Let the facts be heard

These disruptions are occurring because opponents are afraid not just of differing views — but of the facts themselves. Drowning out opposing views is simply un-American. Drowning out the facts is how we failed at this task for decades.

Outrageous… Suddenly protest is un-patriotic to these Leftists. 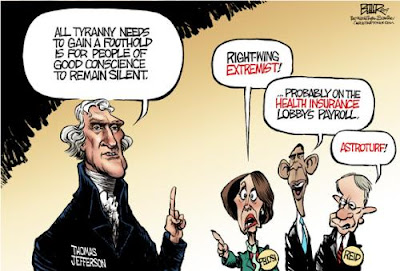 Nate Beeler at The Examiner
So, when did American become some kind of socialist regime?

Maybe these Leftists ought to bail out their own supporters from jail before they start pointing any fingers.