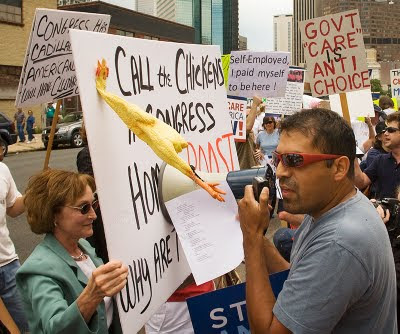 Democrats, like this thug in Denver who is Obama’s Organizing for America local chairman, are trying to silence the opposition to nationalized health care with bullhorns and fists.

“For months, House Democratic leaders have worked to silence any opposing views in this health care debate, both here in Washington and around the country where millions of Americans are struggling in this economy. Every poll taken in the last month shows that a majority of Americans are concerned about, if not outright opposed to, the Democrats’ plan because of the cost and consequences it would mean for their own health care. Each public forum should give every participant the opportunity to express their views, but to label Americans who are expressing vocal opposition to the Democrats’ plan “un-American” is outrageous and reprehensible.

“The American people deserve answers to basic questions about whether the Democrats’ plan will increase health care costs, add to the deficit, increase taxes on middle-class families and small businesses, put government between doctors and patients, force anyone to lose their current health coverage, kill jobs, promote taxpayer-funded abortion, or cut Medicare. The fact is Democrats have not been able to address the very real concerns the American people have.

“There is nothing un-American about trying to have your voice heard.”

And, Rep. Mike Pence blasted democrats for their intent to include taxpayer funding of abortion under their health care plan.