BLOOD FOR OIL– Lockerbie Bomber al-Megrahi Was Released For Oil 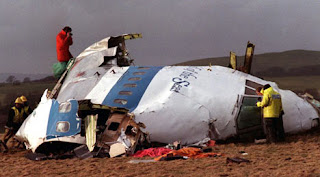 On 21 December 1988, the wreckage of Pan Am Flight 103 crashed as a result of a terrorist bomb. 270 people were killed in the bombing including 169 Americans.

The British government decided it was in their best interest to release Lockerbie bomber Abdelbaset Ali Mohmed al-Megrahi free for oil contracts with Libya.
The Times Online reported:

The British government decided it was “in the overwhelming interests of the United Kingdom” to make Abdelbaset Ali Mohmed al-Megrahi, the Lockerbie bomber, eligible for return to Libya, leaked ministerial letters reveal.

Gordon Brown’s government made the decision after discussions between Libya and BP over a multi-million-pound oil exploration deal had hit difficulties. These were resolved soon afterwards.

The letters were sent two years ago by Jack Straw, the justice secretary, to Kenny MacAskill, his counterpart in Scotland, who has been widely criticised for taking the formal decision to permit Megrahi’s release.

The correspondence makes it plain that the key decision to include Megrahi in a deal with Libya to allow prisoners to return home was, in fact, taken in London for British national interests.

Edward Davey, the Liberal Democrat foreign affairs spokesman, said: “This is the strongest evidence yet that the British government has been involved for a long time in talks over al-Megrahi in which commercial considerations have been central to their thinking.”