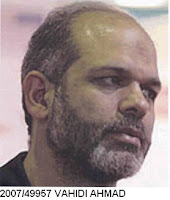 Ahmad Vahidi, the man President Ahmadinejad has named to be Iranian defense minister is wanted in the 1994 bombing of a Jewish cultural center in Buenos Aires that killed 85 people. Vahidi commanded a unit of Iran’s Revolutionary Guard known as the Quds Force at the time of the attack.
Hat Tip Banafsheh Zand Bonazzi

The man nominated to serve as Iran’s defense minister is wanted by Interpol in connection with the 1994 bombing of a Jewish cultural center in Buenos Aires, confronting Iran with yet another challenge to its international reputation after an electoral dispute undermined its legitimacy at home and abroad.

President Mahmoud Ahmadinejad nominated Ahmad Vahidi on Wednesday to serve as defense minister when he submitted his list of 21 nominees to Parliament. Mr. Vahidi was the head of the secret Quds Force, an arm of the Revolutionary Guards that carries out operations overseas.

He was one of five Iranian officials sought by Interpol on Argentine charges of “conceiving, planning, financing and executing” the 1994 attack, which killed 85 people and wounded hundreds, said a statement issued by the Anti-Defamation League condemning the nomination.

Vahidi is wanted by Interpol: 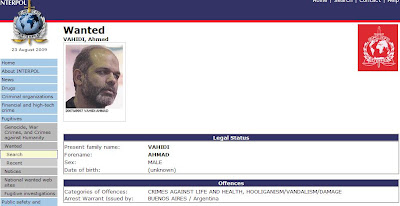