Thank you Al Gore.
African ministers are meeting this week to discuss how to milk billions from industrialized nations for non-existent global warming. 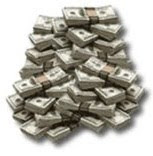 The Midwest just experienced its coldest July on record.
The BBC reported:

Ministers from 10 African countries are meeting in Ethiopia to try to agree a common position on climate change, months before a crucial UN meeting.

They are expected to renew demands for billions of dollars in compensation for Africa because of damage caused by global warming.

African nations are among the lightest polluters but analysts say they will suffer the most from climate change.

BBC science reporter Matt McGrath says the move to agree a common negotiating platform for Africa recognises the continent’s failure to make its voice heard on the debate.

Look for Obama and the democrats to put the US another half a trillion in the hole over this bogus junk science.

More… Global Warming religionists are now asking humans to leave behind 10,000 years of civilization and live locally and sustainably in mud huts, via The Climate Depot.