Student of history, Barack Obama, fumbled another historic event today.
Barack Obama explained to an ABC reporter why he does not like to use the word victory:

“I’m always worried about using the word ‘victory,’ because, you know, it invokes this notion of Emperor Hirohito coming down and signing a surrender to MacArthur,” Obama told ABC News. 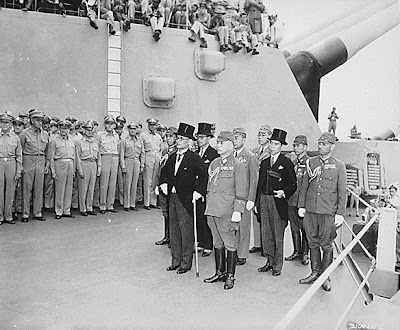 On September 2, 1945, on the deck of the U.S.S. Missouri in Tokyo Bay, the Japanese envoys Foreign Minister Mamoru Shigemitsu and Gen. Yoshijiro Umezu signed their names on the Instrument of Surrender. The time was recorded as 4 minutes past 9 o’clock. Afterward, Gen. Douglas MacArthur, Commander in the Southwest Pacific and Supreme Commander for the Allied Powers, also signed. He accepted the Japanese surrender “for the United States, Republic of China, United Kingdom, and the Union of Soviet Socialist Republics, and in the interests of the other United Nations at war with Japan.”

UPDATE: But do any of you remember who was there with MacArthur?