Her attorney, Thomas Van Flein, also threatened to take legal action against those liberal blogs and the state-run media for slandering the governor.
The Palin-haters at MSNBC better watch it:

Their bogus reports on Governor Palin may end up costing them.

On July 3rd, 2009, Governor Sarah Palin announced her intent to resign her gubernatorial duties and transfer the powers of Governor to Lt. Governor Sean Parnell.

Almost immediately afterwards, several unscrupulous people have asserted false and defamatory allegations that the “real” reasons for Governor Palin’s resignation stem from an alleged criminal investigation pertaining to the construction of the Wasilla Sports Complex. This canard was first floated by Democrat operatives in September 2008 during the national campaign and followed up by sympathetic Democratic writers.1. It was easily rebutted then as one of many fabrications about Sarah Palin. Just as power abhors a vacuum, modern journalism apparently abhors any type of due diligence and fact checking before scurrilous allegations are repeated as fact…

To the extent several websites, most notably liberal Alaska blogger Shannyn Moore, are now claiming as “fact” that Governor Palin resigned because she is “under federal investigation” for embezzlement or other criminal wrongdoing, we will be exploring legal options this week to address such defamation. This is to provide notice to Ms. Moore, and those who re-publish the defamation, such as Huffington Post, MSNBC, the New York Times and The Washington Post, that the Palins will not allow them to propagate defamatory material without answering to this in a court of law. The Alaska Constitution protects the right of free speech, while simultaneously holding those “responsible for the abuse of that right.” Alaska Constitution Art. I, Sec. 5. http://ltgov.state.ak.us/constitution.php?section=1. These falsehoods abuse the right to free speech; continuing to publish these falsehoods of criminal activity is reckless, done without any regard for the truth, and is actionable.

Once again:
** This past year Governor Palin won 15 different bogus ethics complaints filed against her.
** The state of Alaska spent $2 million defending the governor.
** It cost those Sarah Palin-haters nothing to file the bogus complaints.
** Fighting the complaints left Sarah and Todd Palin $500,000 in debt.

Thank God. Sarah Palin should be pissed off. These fruitcakes have been after her since Aug. ’08. I hope she sues the NYT’s, wins, gets the building and donates the property to a church, or turns it into an anti-abortion, pro adoption center. 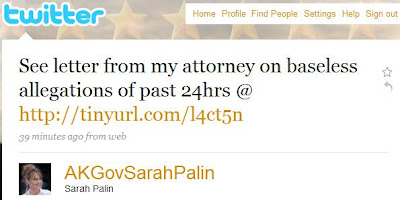 Jim Hoft
Jim Hoft is the founder and editor of The Gateway Pundit, one of the top conservative news outlets in America. Jim was awarded the Reed Irvine Accuracy in Media Award in 2013 and is the proud recipient of the Breitbart Award for Excellence in Online Journalism from the Americans for Prosperity Foundation in May 2016.
Afghan Interpreter Shot Dead in San Francisco After Attacking Police with a Knife (VIDEO)
81 Million Votes: Joe Biden Goes for a Walk in Deep Blue Nantucket and Nobody Cares #LetsGoBrandon
Brilliant: The Difference Between God-Given Human Rights and Democrat Socialism (VIDEO)
United Nations Is Handing Out $800 Debit Cards to Illegal Migrant Families in Mexico Heading to US
Due to the Seriousness of the New Omicron COVID Variant the Biden Admin Has Decided to Leave the US Southern Border Completely Open
See more...