Who ever would have ever guessed this one was coming down the pike?
This was as predictable as Alaskan snow…
The New York Times bashes Sarah Palin: 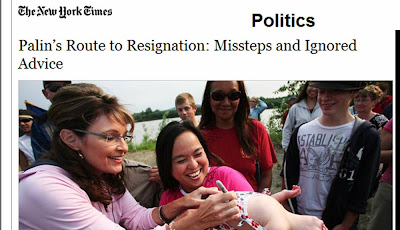 In late March, a senior official from the Republican Governors Association headed for Alaska on a secret mission. Sarah Palin was beset by such political and personal turmoil that some powerful supporters determined an intervention was needed to pull her governorship, and her national future, back from the brink.

The official, the association’s executive director, Nick Ayers, arrived with a memorandum containing firm counsel, according to several people who know its details: Make a long-term schedule and stick to it, have staff members set aside ample and inviolable family time to replenish your spirits, and build a coherent home-state agenda that creates jobs and ensures re-election.

Like so much of the advice sent Ms. Palin’s way by influential supporters, it appeared to be happily received and then largely discarded, barely slowing what was, in retrospect, an inexorable march toward the resignation she announced 10 days ago.

It gets much worse.
You can read the whole hit piece here.

This was so predictable they could have raised money for the paper by holding a national lottery on which day it would be released.

Related… Stuart Schwartz at The American Thinker writes: “Sarah Palin loves God. God loves Sarah Palin. And, that is why they hate her…and Him.”

UPDATE: Not to be outdone, the LA Times posted their own Palin hit piece today.