Click to Enlarge
The Obama caravan drives through Bristol, Virginia this week.

This came in the email after Dear Leader’s town hall event on Obamacare in Bristol, Virginia:

I attended the town hall event in Bristol,VA today. Though very few were allowed inside, there was an amazing turnout outside of people protest healthcare reform, among other things. I hope to send you pictures soon of some great signs I saw. It was expected that those in opposition to the bill would outnumber those in favor by 10-1, but I feel it was much, much more.

I do have a question I was hoping you could answer. During the motorcade when the president was arriving, there were several vehicles following the limo that contained the secret service. All of the vehicles had all the windows rolled down, and back hatch open on the SUVs with the men holding their, I assume assault rifes, machine guns, drawn on everyone lining the streets. Needless to say it took my breath away at the sight of them, and made my friends and I dizzy with fear. I have seen the secret service before, but never like this. While they were intimidating, I never felt in danger. The guns were not drawn when the motorcade was leaving the event. But I turned on a local talk radio program as we were leaving and all the calls were about witnessing the guns being pointed at them and nothing else until the end of the program.

Having said all that, my question is, is this normal protocol during such an event? It very well could be, but after I had to get over the shock of it, I began to feel offended. We were all there peaceful, and have no problems with Obama the man, we have problems with his policies and wanted him to know the opposition was there to be heard, and know that a strong opposition did indeed exist, and that so many people don’t approve of his policies, with this bill in particular.

So, is this normal, and I’m making a mountain out of mole hill, or did they make an exception in this mainly conservative area?

NO Destiny. It’s not normal for the secret service to pull their assault guns on conservative protesters as they drive through town.

Destiny sent this picture of the caravan driving through Bristol: 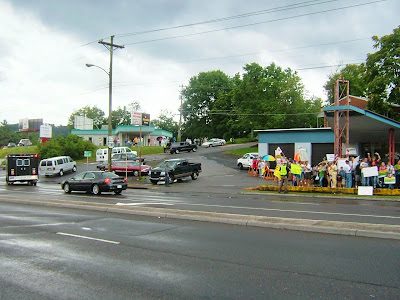 Here’s a close up of the secret service vehicle with the guns drawn on the protesters: 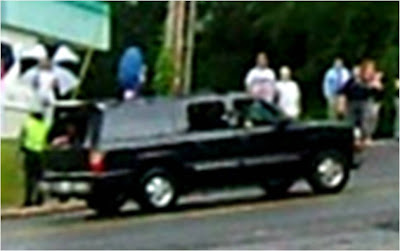