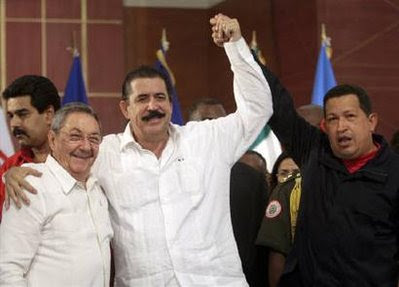 Hondurans are understandably afraid that, backed by Chávez agents and money, it could lead to similar antidemocratic subversion there. In Tegucigalpa yesterday, thousands demonstrated against Mr. Zelaya, and new deputy foreign minister Marta Lorena Casco told the crowd that “Chávez consumed Venezuela, then Bolivia, after that Ecuador and Nicaragua, but in Honduras that didn’t happen.”

It’s no accident that Mr. Chávez is now leading the charge to have Mr. Zelaya reinstated, and on Monday the Honduran traveled to a leftwing summit in Managua in one of Mr. Chávez’s planes. The U.N. and Organization of American States are also threatening the tiny nation with ostracism and other punishment if it doesn’t readmit him. Meanwhile, the new Honduran government is saying it will arrest Mr. Zelaya if he returns. This may be the best legal outcome, but it also runs the risk of destabilizing the country. We recall when the Clinton Administration restored Bertrand Aristide to Haiti, only to have the country descend into anarchy.

As for the Obama Administration, it seems eager to “meddle” in Honduras in a way Mr. Obama claimed was counterproductive in Iran. Yet the stolen election in Iran was a far clearer subversion of democracy than the coup in Honduras. As a candidate, Mr. Obama often scored George W. Bush’s foreign policy by saying democracy requires more than an election — a free press, for example, civil society and the rule of law rather than rule by the mob. It’s a point worth recalling before Mr. Obama hands a political victory to the forces of chavismo in Latin America.

The Honduran government said it will arrest Zelaya if he returns to the country.

As Charles Krauthammer said, “Look a rule of thumb here is whenever you find yourself on the side of Hugo Chavez, Daniel Ortega and the Castro twins you ought to re-examine your assumptions.”
Exactly.

More… Marxist Daniel Ortega was also at the meeting: 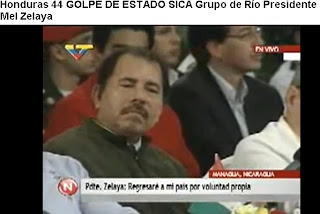