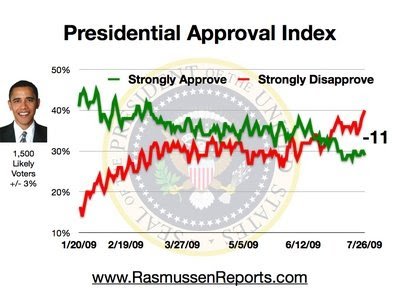 It makes you wonder how many of those lost voters were cops, huh?

The Rasmussen Reports daily Presidential Tracking Poll for Sunday shows that 29% of the nation’s voters now Strongly Approve of the way that Barack Obama is performing his role as President. Forty percent (40%) Strongly Disapprove giving Obama a Presidential Approval Index rating of -11. That’s the first time his ratings have reached double digits in negative territory.

More… Even Zogby has Obama down to a 48% approval rating.