Media Wants to Know: Can Obama Save Us From Hell? 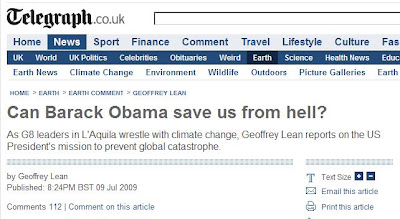 Remember– The Debate Over Global Warming Is Over.
The once respected Telegraph wants to know if Barack Obama can save us from hell of manmade global warming or climate change.

It’s very sad to see my old newspaper in London, The Daily Telegraph, running this headline with no irony whatsoever.