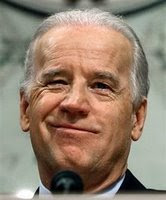 The man is dangerous…
Obama Administration foreign policy guru and chief idiot Joe Biden just gave the terrorists in Iraq the glimmer of hope they so desperately needed.
Prairie Pundit reported on this from The Washington Post:

Vice President Biden warned Iraqi officials Friday that the American commitment to Iraq could end if the country again descended into ethnic and sectarian violence.

Biden delivered the warning during a three-day visit to Iraq that began Thursday, just a few days after the United States formally withdrew most combat troops from Iraqi cities under a security agreement reached last year. It was the vice president’s first visit since President Obama asked him to take the lead on Iraq policy.

Biden who pushed a disastrous plan to partition Iraq was tapped by Obama this past week to be the White House point of contact on Iraq.