In 2007 Iraqi politicians united in protest against Joe Biden and US Democrats.
Biden and the dems passed legislation to divide the democracy of Iraq up into three separate states.
The Iraqis were so outraged by the meddling that they protested in the streets! 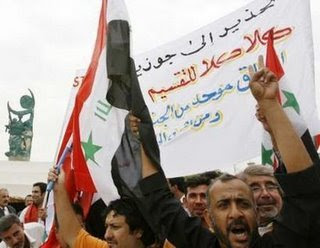 Demonstrators chant slogans during a protest in Baghdad October 6, 2007. Members of the Iraqi Democratic Nation Party held a rally in Baghdad on Saturday protesting against the federal system in Iraq which was proposed by the U.S. Senate. The writing on the banner reads “No No to Federalism, United Iraq from south to north and from east to west”. (REUTERS/Thaier al-Sudani)

Biden will serve as a “high point of contact” in the West Wing on Iraq, a senior administration official said, taking a more active role in reaching out to Iraqi officials and serving as a go-between for American officials on the ground and the White House.

The new assignment was timed to the pullout of U.S. combat forces from Iraqi cities this week but the vice president’s specific duties are still developing and the role is open-ended.

Obama and Biden were both dead wrong about Iraq.
Obama even supported genocide in Iraq.
So this latest decision is really not much of a surprise.