President Obama and Congressional Democrats are set to ram through socialized health-care legislation within the next few weeks! 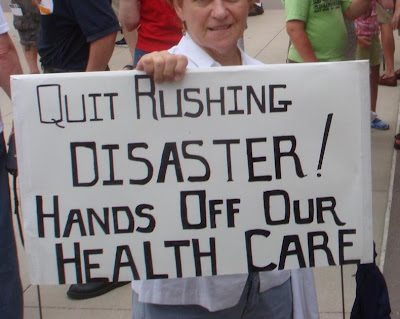 A sign from an anti-Obamacare protest in St. Louis.

And, Democrats are not concerned about GOP support

President Barack Obama may rely only on Democrats to push health-care legislation through the U.S. Congress if Republican opposition doesn’t yield soon, two of the president’s top advisers said.

“Ultimately, this is not about a process, it’s about results,” David Axelrod, Obama’s senior political strategist, said during an interview in his White House office. “If we’re going to get this thing done, obviously time is a-wasting.”

…House Democrats today unveiled legislation totaling about $1 trillion that would expand health care to millions of Americans over the next decade by raising taxes on the wealthiest households. The Senate has yet to agree on a bill as Democratic lawmakers struggle to get Republican support.

Of course, the state-run media is all to eager to help Dear Leader with his socialist agenda.
All three major networks will interview Obama on Wednesday on Obamacare.

Meanwhile in Great Britain… A 9-month wait for arthritis treatment: Delay can mean a lifetime of agony for victims.