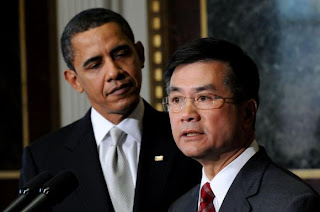 Team Obama not only intends to bankrupt American and send all manufacturing overseas via the Cap-&-Tax legislation…
They also want America to pay for China’s emissions.
The Wall Street Journal reported, via HotAir:

“It’s important that those who consume the products being made all around the world to the benefit of America — and it’s our own consumption activity that’s causing the emission of greenhouse gases, then quite frankly Americans need to pay for that,” Commerce Secretary Gary Locke told the American Chamber of Commerce in Shanghai.

The idea that rich-country consumers should pick up the tab for some of China’s industrial emissions has been gaining currency lately—but not from within the Obama administration. The argument is that many of China’s factories churn out cheap stuff for the West, not for domestic consumption, so those consumers are actually responsible for the emissions. China, of course, loves the idea.

The US should probably be paying for global health care, too.
Or, is that already part of the Obamacare plan?