Today’s bogus state-run media news story is brought to you by the Far Left kooks at TPM Muckraker:

The Far Left is outraged over this witch doctor image.

Of course, the Far Left was silent when Condi and Bush were pictured as a witch doctors. 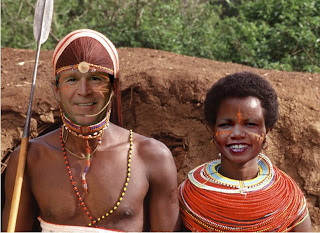 And, it was the Far Left who frequently referred to Condi Rice as a house slave during the Bush years.
No outrage.