The freaks from Westboro Baptist Church drove down from Topeka last night to hold a protest at George Tiller’s vigil.
The freaks held signs emblazoned with such messages as “Abortion is bloody murder” and “Baby killer in hell.” 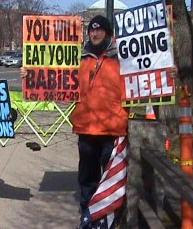 About 10 anti-abortion protesters gathered across the street from a downtown Wichita vigil where supporters of George Tiller remembered the slain abortion provider.

The protesters outside Sunday’s vigil were from Westboro Baptist Church in Topeka, which also pickets military funerals. The protesters held signs emblazoned with such messages as “Abortion is bloody murder” and “Baby killer in hell.”

The protesters and about 20 Tiller supporters shouted at each other. A large number of police officers stood by to make sure the scene stayed under control.