Barack Obama said today that he is still looking for the Iranian regime to send the international community a clear signal “on what it is — and is not.” 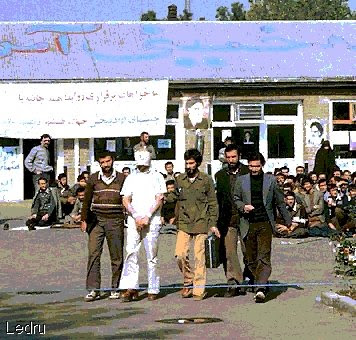 Here’s a clue… The Iranian regime sent the international community a clear signal when they took 52 Americans hostage at the US Embassy in 1979.
…And, it’s been going downhill since then.

In an interview with CBS News’ Harry Smith, President Obama said he is “very concerned” with the thrust of the statements made today by Iran’s Ayatollah Ali Khamenei supporting the country’s disputed election results.

“And I’m very concerned based on some of the tenor — and tone of the statements that have been made — that the government of Iran recognize that the world is watching. And how they approach and deal with people who are, through peaceful means, trying to be heard will, I think, send a pretty clear signal to the international community about what Iran is and — and is not.”

Huh? After 30 years of terror and violence and dead US soldiers in Lebanon, Iraq and Afghanistan, Obama still is looking for the regime to send the world a clear signal on what it is — and is not?

Meanwhile… The deranged Left is losing it.