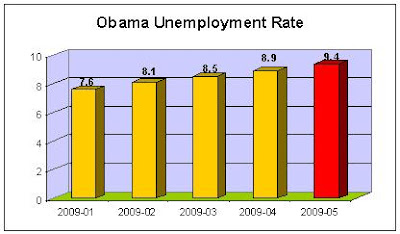 (Misery Index)
The US has lost 16,000 jobs each day since Democrats passed their MASSIVE Generational Theft Act, the largest redistribution of wealth from the private sector to government officials in US history.

With companies in no mood to hire, the unemployment rate jumped to 9.4 percent in May, the highest in more than 25 years. But the pace of layoffs eased, with employers cutting 345,000 jobs, the fewest since September.

The much smaller-than-expected reduction in payroll jobs, reported by the Labor Department on Friday, adds to evidence that the recession is loosening its hold on the country. It marked the fourth straight month that the pace of layoffs slowed.

“This tide is turning,” said Richard Yamarone, economist at Argus. “We expect this trend of slower job loss to continue throughout the year.” 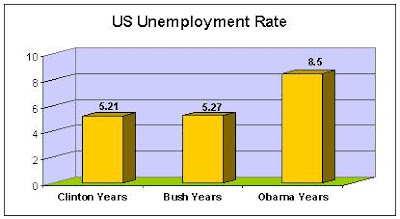 Despite the recession he inherited, 9-11, stock market scandals, Hurricane Katrina and two wars in Iraq and Afghanistan, the unemployment rate during the Bush years averaged out to 5.27%. (Misery Index)

UPDATE: The Obama Administration announced today that in response to this record unemployment news they would start spending more money.

UPDATE 3: This doesn’t look good…
From this graph it doesn’t appear that we’ve reached the peak yet:

Bureau of Labor Statistics– via Sweetness and Light

UPDATE 4: Here are some more stats on the current meltdown.