She’s 2 for 6!
This wise latina woman’s decisions have been overturned 66% of the time!
That’s awful. 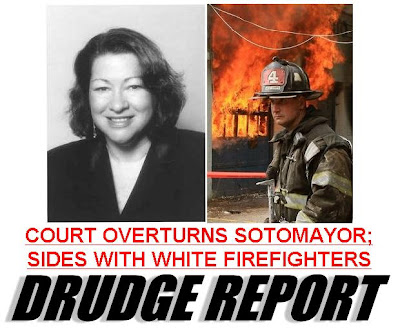 But, the state-run media reported today that Sotomayor’s awful record should not affect her confirmation.
The Washington Post reported:

The Supreme Court’s rejection of a decision against white firefighters endorsed by Judge Sonia Sotomayor gives Republicans a renewed chance to attack her speeches and writings but is not expected to imperil her confirmation to the high court, political and legal sources said yesterday.

The decision that the New Haven, Conn., firefighters were unfairly denied promotions because of their race comes two weeks before Sotomayor’s Senate confirmation hearings and is an unwelcome distraction for the White House from what had seemed like a relatively smooth confirmation process. It is also somewhat of an embarrassment, forcing administration officials to explain why the court overturned a controversial decision backed by its prospective next member.

Got that?
…Her record is a “distraction” and “somewhat of an embarrassment!”
Somewhat?
She’s 2 for 6!

UPDATE: RedState says her record is worse than that.
Hat Tip FeFe