Sick.
Obama lied about his family’s faith during his campaign. 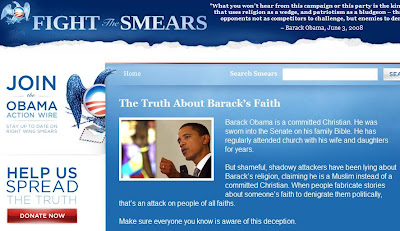 When people fabricate stories about someone’s faith to denigrate them politically, that’s an attack on people of all faiths.

During the 2008 Campaign Barack Obama’s website claimed that Obama’s father was an agnostic or atheist:

“Barack” is the candidate’s Kenyan father’s name; Obama’s middle name, “Hussein,” is his grandfather’s name. Obama has described his father as atheist or agnostic.

Today we find out his father Barack Obama Senior was indeed a Muslim.
Jake Tapper reported:

During a conference call in preparation for President Obama’s trip to Cairo, Egypt, where he will address the Muslim world, deputy National Security Adviser for Strategic Communications Denis McDonough said “the President himself experienced Islam on three continents before he was able to — or before he’s been able to visit, really, the heart of the Islamic world — you know, growing up in Indonesia, having a Muslim father — obviously Muslim Americans (are) a key part of Illinois and Chicago.”

But, the media did not just cover for Obama and his father.
The media also insisted his Kenyan grandmother was a Christian.
But, this past month we learned that this “Christian” grandmother is going to attend The Hajj.
She just might be the first Christian to attend the Hajj in years.

It’s more of that change we’ve been looking for.

UPDATE: BG pointed out this quote from last year:

The candidate’s comment at a Boca Raton, Florida, town
hall meeting on May 22, 2008, was typical: “My father
was basically agnostic, as far as I can tell, and I didn’t
know him,” he said.

In September 2008, candidate Obama told a Pennsylvania crowd, “I know that I’m not your typical presidential candidate and I just want to be honest with you. I know that the temptation is to say, ‘You know what? The guy hasn’t been there that long in Washington. You know, he’s got a funny name. You know, we’re not sure about him.’

And that’s what the Republicans when they say this isn’t about issues, it’s about personalities, what they’re really saying is, ‘We’re going to try to scare people about Barack. So we’re going to say that, you know, maybe he’s got Muslim connections.’…Just making stuff up.“