Never waste a good crisis.
Sick. Leftist CBS writer Daniel Farber compares the evil regime in Iran to the United States.
In an article posted on the CBS blog the state run media channel compared the intentional and organized murder of democracy protesters in Iran to the accidental shootings of antiwar protesters at Kent State University in 1970. 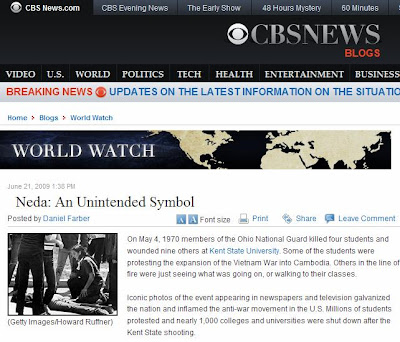 On May 4, 1970 members of the Ohio National Guard killed four students and wounded nine others at Kent State University. Some of the students were protesting the expansion of the Vietnam War into Cambodia. Others in the line of fire were just seeing what was going on, or walking to their classes.

Iconic photos of the event appearing in newspapers and television galvanized the nation and inflamed the anti-war movement in the U.S. Millions of students protested and nearly 1,000 colleges and universities were shut down after the Kent State shooting.

Yesterday, a young woman who was part of the crowd in Tehran, either protesting or simply watching the events unfold, was shot in the chest, apparently by Iranian Basiji security forces on rooftops.

Leave it to the Left to find a way to bash America during this horrible Iranian crisis.