Politico reporter Anne Schroeder Mullins thought the Playboy list of the Top 10 Conservative women to rape was a good read.
She linked to it yesterday.
Here’s a cached page: 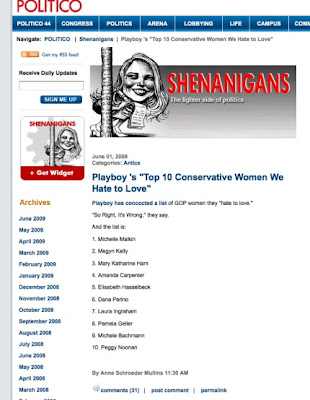 From her posting, she obviously didn’t see anything wrong or offensive with the Playboy article describing hate-raping conservative women:

Playboy has concocted a list of GOP women they “hate to love.”

Well, today its gone.
Mullins took down her post and replaced it with this: 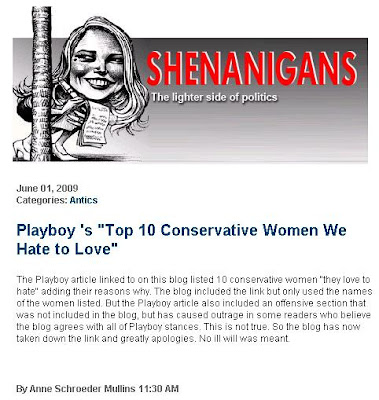 The Playboy article linked to on this blog listed 10 conservative women “they love to hate” adding their reasons why. The blog included the link but only used the names of the women listed. But the Playboy article also included an offensive section that was not included in the blog, but has caused outrage in some readers who believe the blog agrees with all of Playboy stances. This is not true. So the blog has now taken down the link and greatly apologies. No ill will was meant.

Oh, stop it.
For Mullins to claim that just a part of the Playboy article was offensive was completely dishonest… The article was about raping conservative women.
Hello?
And, notice that Schroeder claims only “some readers” were offended. So is she saying the pro-rape liberal Politico readers approved of the article?

Oh, and it’s “apologizes” not “apologies.”