What a horrible response from the leader of the Free World.
It’s a sad day for liberty and freedom.

Barack Obama finally responded to the Iranian crisis today.
He said, “It’s up to Iran to determine its own leaders.”
The Politico has more on Obama’s response to the Iranian unrest:

On Saturday, the White House was merely “monitoring” the situation, press secretary Robert Gibbs said in a statement. On Sunday, Vice President Joe Biden said he had “doubts” about the election. And on Monday, State Department spokesman Ian Kelly said the U.S. is “deeply troubled” by events in Iran but stopped short of condemning them.

“I haven’t used that word, ‘condemn,’” he told the State Department press corps. “We need to see how things unfold.”

“You need to see more heads cracked in the middle of the street?” Fox News’ James Rosen shot back.

“We need a deeper assessment of what’s going on,” Kelly said.

Meanwhile… The regime is shooting at protesters from rooftops.
But, Obama needs more time to assess the situation. 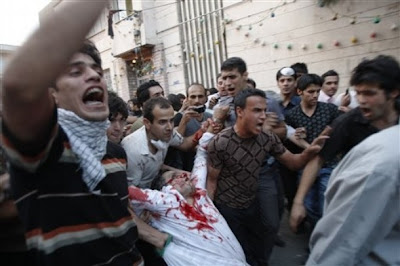 More… Via Instapundit: 66% say Obama’s not being tough enough on Iran.

Still More… Senator Lieberman gets it.