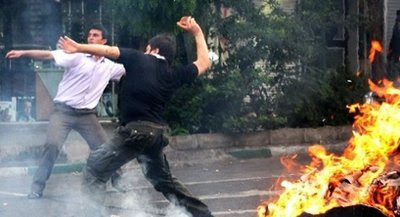 Supporters of Iran’s defeated presidential candidate Mir Hossein Mousavi throw stones at riot police during a demonstration in Tehran. Thousands of Iranians clashed with police on Saturday as they defied an ultimatum from supreme leader Ayatollah Ali Khamenei for an end to protests over last week’s disputed presidential election. (AFP)

The brutal regime in Iran is shooting on protesters!
A young man is shot on the street in Tehran: