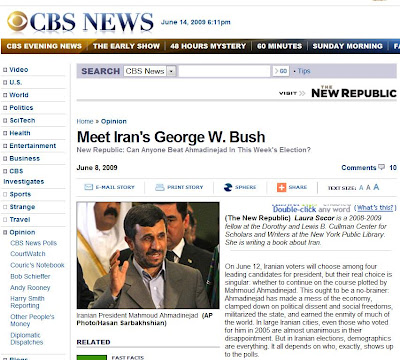 Of course, CBS forgot the part about Bush liberating over 50,000,000 Muslims from two of the most violent regimes in history and bringing democracy to the Middle East.
For some reason, that did not make it in their story.

This report was way out of line.

Now here’s the truth that won’t be reported.
George W. Bush sent this message to the Iranian people this year:

And, Obama’s response to the stolen elections and violence in Iran?

“This is a debate among Iranians about Iran’s future.”

UPDATE: For the record- The New York Times detailed the recount investigation paid for by a consortium of newspapers and admitted that BUSH WON in 2004.
Hat Tip The Anchoress