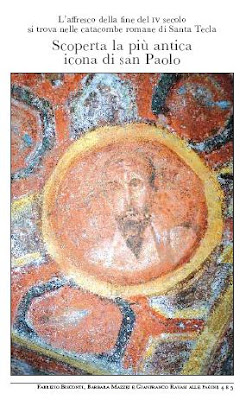 The image was published today in the Vatican newspaper Osservatore Romano.

The oldest known image of St. Paul was discovered recently on the walls of a catacomb in Rome.
Reuters reported:

Vatican archaeologists using laser technology have discovered what they believe is the oldest image in existence of St Paul the Apostle, dating from the late 4th century, on the walls of catacomb beneath Rome.

Vatican newspaper Osservatore Romano, revealing the find on Sunday, published a picture of a frescoed image of the face of a man with a pointed black beard on a red background, inside a bright yellow halo. The high forehead is furrowed.

Experts of the Ponitifical Commission for Sacred Archaeology made the discovery on June 19 in the Catacomb of Santa Tecla in Rome and describe it as the “oldest icon in history dedicated to the cult of the Apostle,” according to the Vatican newspaper.

The discovery, which involved removing layers of clay and limestone using lasers, was announced a day before Rome observes a religious holiday for the Feasts of St Peter and St Paul.

UPDATE: FOX News— The first-ever scientific test on what are believed to be the remains of the Apostle Paul “seems to confirm” that they do indeed belong to the Roman Catholic saint, Pope Benedict XVI said Sunday.