Actually this was his second apology speech to the Muslim World.
He also apologized for America two months ago in Turkey.
Obama doesn’t seem to think that liberating 50,000,000 Muslims from two of the world’s most brutal regimes counted for much. 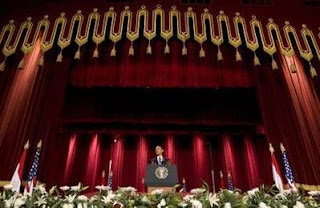 U.S. President Barack Obama speaks in the Grand Hall of Cairo University in Cairo June 4, 2009. Obama told world Muslims on Thursday that violent extremists have exploited tensions between Muslims and the West, and that Islam was not part of the problem but part of promoting peace. (REUTERS/Larry Downing)

“I am a Christian, but my father came from a Kenyan family that includes generations of Muslims,” he said. “As a boy, I spent several years in Indonesia and heard the call of the azaan at the break of dawn and the fall of dusk. As a young man, I worked in Chicago communities where many found dignity and peace in their Muslim faith.”

The comments in what he called “the timeless city of Cairo” are by far the most extensive he has made about his Muslim roots. Obama added another personal note as he insisted on greater religious freedom throughout the world: “I saw it firsthand as a child in Indonesia, where devout Christians worshiped freely in an overwhelmingly Muslim country. That is the spirit we need today.”

Here’s more from his apology speech:

In a gesture to the Islamic world, Obama conceded at the beginning of his remarks that tension “has been fed by colonialism that denied rights and opportunities to many Muslims, and a Cold War in which Muslim-majority countries were often treated as proxies without regard to their own aspirations.”

“And I consider it part of my responsibility as president of the United States to fight against negative stereotypes of Islam wherever they appear,” said the president, who recalled hearing prayer calls of “azaan” at dawn and dusk while living in Indonesia as a boy.

Israel Matsav has the photo of the day.

“I know there has been controversy about the promotion of democracy in recent years, and much of this controversy is connected to the war in Iraq. So let me be clear: no system of government can or should be imposed upon one nation by any other.”

This was a significant statement.
If the US president will not stand for democracy, who will?

Idiot Valerie Jarrett just said that the Bush Administration strengthened the terrorists.
–Tell that to the thousands of dead jihadists.