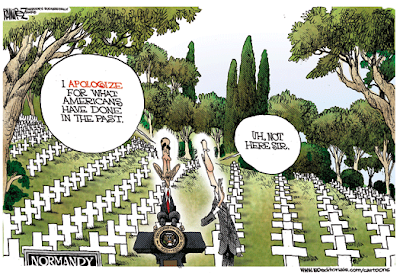 It was a decent speech for an antiwar cut-and-runner who said that, “Preventing a potential genocide in Iraq isn’t a good enough reason to keep U.S. forces there.”
It will be interesting to see if he was able to get his history right this time.
Thank goodness he left his “US is one of the largest Muslim countries” line out of this speech.

Here is video of President Reagan’s speech on the 40th Anniversary of D-Day.

In a surprise move, Obama didn’t apologize for America.
The BBC reported:

Veterans of the landings are among the invited audience. Mr Sarkozy awarded the French Legion d’Honneur, the country’s highest military honour, to one American, one Briton, one Canadian and one Frenchman.

Mr Obama’s great-uncle, Charlie Payne, 84, who helped to liberate a concentration camp near Buchenwald, has also travelled to Normandy.

British Prime Minister Gordon Brown and Canada’s Stephen Harper are also at the service, along with Britain’s Prince Charles.

Max Cleland was there today(?)
And, Obama’s great-uncle was in the crowd.

D-Day was a “TRAGEDY”? The tragedy would have been if DDay failed!
While there was great loss of life, at Normandy, those are heroes graves, not tragic ones. Given the tenor of the speech, and how Obama claims that it was a miracle it succeeded, one must posit the belief, as with Obama’s take on the surge for the past four years, that if he were in the Oval Office when the plans for DDay were being hashed out, he would have rejected them as too improbable and impossible to succeed. How we would have retaken Europe under a President Obama is a mystery that gets me sick even to consider.