We’re in the best of hands.
Barack Obama has a 31 year-old student dismantling General Motors and reshaping capitalism.
Unreal. 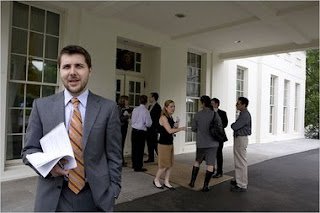 The New York Times made this stunning admission today:

It is not every 31-year-old who, in a first government job, finds himself dismantling General Motors and rewriting the rules of American capitalism.

But that, in short, is the job description for Brian Deese, a not-quite graduate of Yale Law School who had never set foot in an automotive assembly plant until he took on his nearly unseen role in remaking the American automotive industry.

Nor, for that matter, had he given much thought to what ailed an industry that had been in decline ever since he was born. A bit laconic and looking every bit the just-out-of-graduate-school student adjusting to life in the West Wing — “he’s got this beard that appears and disappears,” says Steven Rattner, one of the leaders of President Obama’s automotive task force — Mr. Deese was thrown into the auto industry’s maelstrom as soon the election-night parties ended.