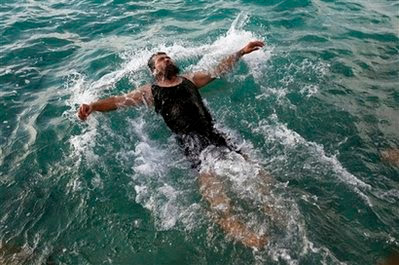 (AP)
Life is good. A Uighur terrorist takes a dip in the Atlantic off the shore near Hamilton, Bermuda, after his liberation from Club Gitmo.

Real Clear Politics has the video:

SMITH: Leon Panetta intimated the former vice president was playing politics with national security issues. The former president has intoned his own displeasure with some of your policy changes. I think they feel like some of the things that you’ve done, in fact, are treacherous.

OBAMA: Well, I think when it comes to Vice President Cheney, he and I have a deep disagreement about what’s required to keep the American people safe. And I think that disagreement has been amply aired and certainly he has a right to voice his opinions. I would argue that our policies are making the American people safer, and that some of the policies that he’s promoted in the past have not.