** Taking your wife out on a date on the US taxpayer’s dime- Priceless. 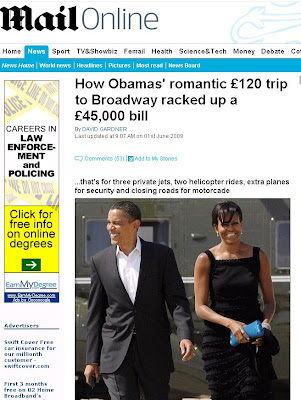 It was a campaign pledge that Barack Obama didn’t dare break – a promise to take his wife out for dinner and a show once the election was over.

So on the weekend he booked a babysitter, asked Michelle to put on a little black dress and swept her off for a date…

The romantic jaunt is estimated to have cost the taxpayer more than £45,000 in transport and security costs – because the date was in New York.

The President used three planes, one to carry the couple and two to ferry aides and reporters all the way from Washington.
The cost of each flight was thought to be nearly £15,000.

The bill was pushed even higher with the use of two helicopters, one to take the Obamas to catch their plane in Washington and another to zip the party into Manhattan from JFK airport.