If they’re not bowing to Obama or dreaming about sleeping with him, the media is now talking about Dear Leader being some “sort of god.”

Maybe someday the media will start reporting that their god is bankrupting the country.

Power Line has more on Newsweek:

The “new Newsweek” is exemplified by Meacham’s decision to turn an issue over to comedian Stephen Colbert as a guest editor. And also by the latest swoon by long-time Newsweek lefty Evan Thomas, who, on “Hardball,” proclaimed Barack Obama a “sort of God”:

THOMAS: He’s going to bring all different sides together.

UPDATE: This was posted at The Corner: 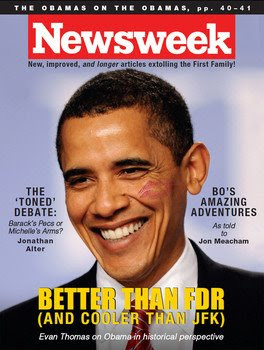 It’s actually a parody… But maybe Newsweek can save it for one of their future issues.

UPDATE: The media’s crush on Obama is now a national joke.

Minnesota Governor Tim Pawlenty offered up his own round of sharp-edged zingers in remarks to the College Republican National Committee Friday night, POLITICO’s Zack Abrahamson reports.

“The only thing growing faster than the federal government’s deficit is Chris Matthews’ man-crush on Barack Obama,” he said.