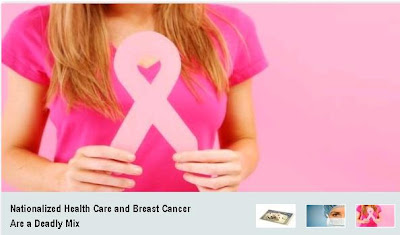 Nationalized Health Care and Breast Cancer Are a Deadly Mix

Democrats stepped up efforts this week to introduce their disastrous socialized health care plan. President Obama already called on his Democratic colleagues to enact this legislation by August. He even proposed that the wealthy would fork the bill for this massive entitlement program. To persuade Americans that this plan is needed Obama has often repeated, “The cost of health care now causes a bankruptcy in America every thirty seconds.” This, of course, is simply unsupportable. If you add up all bankruptcies in a year you barely get one every thirty seconds and not every bankruptcy is due to the cost of health care. Team Obama certainly understands this. You would hope so anyway.

Obama and democrats insist their program will benefit the 46 million Americans who they say are uninsured. This, of course, is not accurate either. According to The Spectator 9.7 million of this 46 million are not citizens of the United States. Another 14 million of the uninsured are eligible for Medicaid and SCHIP but have never signed up for the programs. They could be signed up for government insurance if they ever made a visit to the emergency room. Another 17.6 million of the uninsured had annual incomes of more than $50,000. This leaves you with around 5 million Americans without insurance which is a far cry from 46 million. But, why let facts get in the way? Barack Obama and Democrats have a plan to push on America. They want their socialized health care.

Like everything Obama does, this plan will have an enormous cost. That’s why Obama has already announced that he will get the rich to pay for it. And on the flip side, Democrats also plan to penalize those with adequate financial resources who don’t elect to get insurance. This mandate on adults who do not purchase insurance is something Obama said he would not do during the election.

But, not much is being said on how this plan will affect Americans and women in particular. Looking at the nationalized health care systems in Europe Obamacare will likely be a big step backwards for women’s health here in the United States.

In Britain, where they enjoy socialized medicine, breast cancer rates have soared by more than 80 percent in the past 30 years under their system.

More… Uriel adds this in the discussion below:

I’m a survivor too but not from breast cancer…but the beginnings of cancer in the form of uterine tumors that nearly bled me to death…till my husband finally talked me into seeing a doctor. Lying on the table, all grey faced, someone bent down to me and asked me “Do you want to live?”, I whispered “yes”…and whalla! They saved my life. Still here

I cant have children anymore, but I was blessed with three before this came about.
I do wish there would be more time spent researching cancerous forms to save our mothers, fathers, sons, daughters…after my ordeal, it was like being born again. (tears)

And it was done quickly…nobody made me wait. Oh my God in Heaven, you cannot measure how grateful I am.

Will socialized medicine be so quick to ‘want’ to save me and others should the time come due again?

Thank you, Uriel. Glad you are with us today!
And, Winefred from Canada sends out a warning:

As a long-time resident of Canada, I was dismayed one day to hear on a Buffalo, N.Y., radio station that they were trying to get a program funded so that poor women could get free access to minimum standard breast cancer screening, that is, an annual mammogram after age 40. Gee, I thought, if I were a poor Buffalonian instead of a privileged Torontonian, I’d get more attention than the standard Canadian screening: one mammogram every TWO years after age FIFTY (unless you have a family history of breat cancer). Welcome to socialized medicine, America. Even in theory the standards are no better, sometimes worse — not to mention what happens in practice under a massive and under-funded medical bureaucracy.

UPDATE: Mark Tapscott has more on this today.

UPDATE 2: The Wall Street Journal had more on Obamacare today.
Here’s a memorable line: “The physician shortage is so severe that some towns hold lotteries, with the winners gaining access to the local doc.”
Hat Tip Abigail R.