Megan Fox says she didn’t mean to be a mean girl.

At the June 15 London premiere of “Transformers: Revenge of the Fallen,” Fox ignored a young boy as he desperately tried to give her a yellow rose. (“Even the flower is wilting with sadness!” sniped blogger Perez Hilton.) 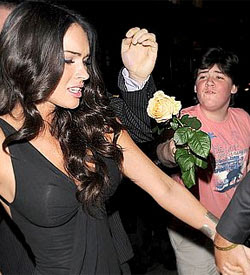 After seeing the photos of the boy’s sad face, Fox tells Collider.com, “I feel so sad for him. That’s so terrible. That kills me.”

Sadly, Megan did not apologize to those Americans she wants dead.
In an interview earlier this month Fox said this about American hillbillies:

At a press conference in South Korea yesterday, Fox was asked how she’d prevent the evil Transformer Megatron from destroying the world. Saying she’d barter with him, the star explained how she’d reason with the character:

“Instead of the entire planet, [I’d say to him]: Can you just take out all of the white trash, hillbilly, anti-gay, super bible-beating people in Middle America?”