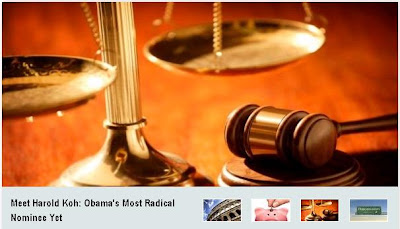 Over two hundred years ago our Founding Fathers overthrew the governance of the British monarchy to become the sovereign United States of America. Today the Obama administration wants to bring back foreign authority.

On March 23rd, Barack Obama nominated Harold Koh to be the State Department’s legal adviser. Koh, who worked with the Clinton Administration before he became Dean of Yale Law School in 2004, would have far reaching powers to advise on all legal issues, domestic and international if confirmed. This includes assisting Department principals and policy officers in formulating and implementing the foreign policies of the United States, and promoting the development of international law and its institutions as a fundamental element of those policies. M. Edward Whelan III observed at “Bench Memos” that Koh “would be advising on the legal positions that the United States should be taking in federal courts on issues arguably implicating international law… He would be counseling State Department officials on international negotiations, treaty interpretation, and treaty implementation; and he would be a major player in interagency disputes on all these matters.” This is an extremely powerful position. And, wouldn’t you know it? Barack Obama picked one huge leftist kook for the position.

Koh is a noted transnationalist who, based on his writings and statements, aims to use international and foreign law to deprive Americans of our rights as American citizens. Transnational progressivism is a term coined by Hudson Institute Fellow John Fonte in 2001 to describe a movement and political view that endorses a concept of postnational global citizenship and promotes the authority of international institutions over the sovereignty of individual nation-states. Koh is a hardcore transnational progressive…

You can read the rest here. There is also a list of my recent columns at the page.

More… Mike pointed out: Not to mention Koh submitted an amicus brief on behalf of Gitmo terrorists in a case the liberals like Koh actually lost…ie, he was on the wrong side again.