The Joshua Chamberlain Society is a local charity that identifies and adopts wounded or fallen military service members who have made such an extraordinary sacrifice for our country. In the same fashion that our service members have sacrificed for their country forever, the Society is dedicated to making an on-going commitment to our Heroes for the remainder of their lives (or the lives of their families, for fallen Heroes).

Recently Randy Soriano, the founder of the Joshua Chamberlain Society, sent in this information on the progress of Staff Sergeant Joshua Eckhoff. Joshua is a local hero who was injured in Iraq and later adopted by the organization:

As we all prepare for the cook-outs, time with friends and family, and other festivities that surround the coming holiday weekend, the Joshua Chamberlain Society asks you to please keep in mind the true intent of the day; remembering the men and women who have sacrificed so greatly in service to this nation and its Armed Forces. As part of that remembrance, we are extremely proud to announce that we have adopted our first JCS Hero, Staff Sergeant Joshua Eckhoff, Missouri Army National Guard.

Sgt. Eckhoff is a true American hero living amongst us and serves as a great reminder as to why we all have gotten involved in JCS – he has served our country with valor, sustained injuries on our behalf that he will live with for a lifetime, but maintains a humility and sense of honor that is humbling to witness. Indeed, this valor, grace, and sacrifice led to Josh being awarded the inspiring Bronze Star and Purple Heart medals for his service. As most people recognize, these awards are some of the most prestigious that our nation bestows upon its service members.

We are very proud that Josh has agreed to be a part of JCS. As people learn of the way he has served our country and lived his life, he will become an example to all of us, including other service members recovering from severe combat injuries. We look forward to introducing you to Josh at our Formal Dinner event, set to take place in early 2010. In the meantime, we take this opportunity to introduce you to Josh via the admittedly limiting confines of email.

Josh is a 2003 graduate of Parkway South High School, where he played basketball and football. He joined the Army National Guard in 2002 and first deployed to Iraq for a one year tour in February, 2004. In that first tour of duty, Josh’s duties included the training of Iraqi Security Forces. After returning to the U.S. in February, 2005, Josh continued his education at Pierre Laclede Honors College at the University of Missouri – St. Louis (UMSL).

Seven months later, in September 2005, Josh’s unit was reactivated to participate in the recovery of New Orleans in the aftermath of Hurricane Katrina. Again, after that six week deployment, Josh returned to school. Josh and so many other members of our Armed Forces assist not only militarily but in humanitarian ways both in this country and abroad.

By October 2007, Josh had returned to Iraq as part of the 1138th Engineer Company. His unit was taking part in one of the most important and high profile missions in Iraq – finding and destroying explosive devices before other troops could get hurt by them. The success of the operations performed by Josh, his unit, and other units with similar missions has saved countless American lives.

Josh’s life changed forever on February 6, 2008. On that date, as his unit was in the midst of yet another critical “clearing” mission, the vehicle in which Josh was traveling hit an improvised explosive device (IED). That explosion took the life of Josh’s comrade, Sgt. Bradley Skelton of Gordonville, Missouri, and left Josh with severe head injuries. There began an ongoing struggle to, at first, survive, and ultimately thrive. Simply put, none of us can imagine the challenges that Josh and his family have faced over the last 15 months. At first, Josh could not talk, eat, or drink on his own. But, today, we are amazed and humbled yet again by the progress he has made and the results of his and his family’s steadfast determination that Josh continue to recover.

We have begun to discuss the ways in which JCS can assist Josh, above and beyond the medical care provided by the government. As a first expression of our support for Josh, in the lifelong commitment that JCS has made to him, we purchased a $500.00 pre-paid gas card to help defray the costs incurred in driving between Carbondale to St. Louis when Josh has a “weekend pass.” Because of your generous donations and work on JCS’s behalf at our fundraisers, we are positioned to provide much greater support going forward, as Josh’s needs dictate.

We hope you have enjoyed your first introduction to Josh – an American hero and new JCS Hero. As a last bit of information, though, we think you will greatly enjoy the below letter that Josh wrote to students at Parkway South in 2004, during his first tour in Iraq. He was asked to write the letter by his former teacher, Ms. Elizabeth Morrison. It is a tremendous honor to have had the opportunity to introduce you to Josh, and that honor only increases because we can use his own words to convey an uplifting and resounding message of hope and kindness that reverberates even louder in light of Josh’s continuing legacy.

Stay involved. Never Forget. The Joshua Chamberlain Society will be there. 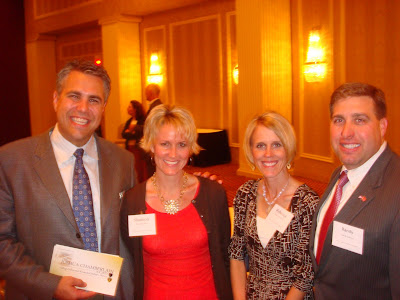 Randy Soriano (far right) and Matthew Cutler (left) attended the Conservative Heartland Leadership Conference (CHLC) held earlier this month. They are pictured here with their lovely wives. Randy and Matthew are the founders of The Joshua Chamberlain Society. This organization identifies and adopts wounded or fallen military service members who have made such an extraordinary sacrifice for our country. This group is dedicated to making an on-going commitment to our Heroes for the remainder of their lives (or the lives of their families, for fallen Heroes).