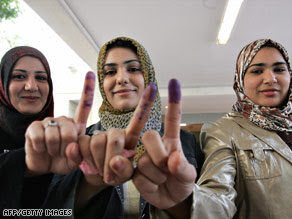 This morning at a breakfast with representatives from the state-run media, Rahmbo claimed that Obama’s Cairo Speech in June actually affected the results of the February election in Iraq.
(Don’t expect any members of the media to put this one together.)
Mary Katharine Ham at The Weekly Standard Blog reported:

Today, speaking to a group of Washington reporters at a Christian Science Monitor breakfast, White House Chief of Staff Rahm Emanuel reinforced that argument by declaring that Obama’s speech in Cairo “will go down as one of the most significant foreign policy speeches.”

“It was equal to what Kennedy’s speech was, what Reagan’s speech was,” he said. “I think he did 20 years worth of work…for advancing America’s interests…We are no longer the issue in that region of the world.”

He went on to cite several recent Middle Eastern political events as evidence that Obama’s approach was bearing fruit. He mentioned elections in Lebanon, which gave the Western-backed March 14 coalition a majority of seats in the parliament there. He cited a February vote in Iraq (Obama was apparently able to affect that with the mere mulling of a speech to the “Muslim world.”), which rewarded Maliki’s crackdowns on militias and rejected Iran-aligned religious candidates. He cited Kuwaiti elections, which gave seats to women while taking seats from Islamists.Then, onto Iran:

“Or, you look at Iran: the moderate voices of reform that are willing to accept some kind of engagement in modernity are winning, and the extremists are back on their heels,” Emanuel said. “It’s not just one speech, but it’s a series of policies.”

Of course, this was ridiculous.
The truth is that Obama supported genocide in Iraq rather than holding US troops there to keep the peace and build a democracy.
His stand on Iran has been even worse.

If Obama can take credit for an election that occurred in February, he can accept blame for the failing economy since taking office in January.

Agreed.
And, maybe he could stop blaming Bush for the deficit he created while he’s at it.