The Iraqi people hope the Green Revolution will mean less meddling by the Iranians. 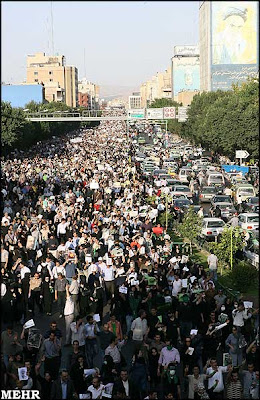 Iranians protest the regime. (Mehr News)
The Iraqi people hope that the green revolution in Iran will lead to less interference by the regime in Iraqi affairs.
The AFP reported:

In a bazaar in Baghdad’s predominantly Shiite district of Kadhimiyah, one tailor bluntly expresses hope that the turmoil now besetting Iran will lead Iraq’s neighbour to stop interfering in his country.

“Iran constantly meddles in our affairs; I hope that change means they will stop intervening,” 43-year-old Salah Aziz told AFP.

Like many Iraqi Shiites, Aziz backs the Iranian protesters who have turned out onto the streets in massive demonstrations over the past week to contest the re-election of President Mahmoud Ahmadinejad.

His views mirror the distrust many here have for Tehran, even as the two countries with strong Shiite majorities have strengthened ties in recent years, nearly three decades after the start of a war that left a million dead.

Those improved relations, sparked by a number of Iraqi Shiite political leaders who lived in Iranian exile during the dictatorship of Saddam Hussein, have given Tehran greater sway with Baghdad.

“Iranians have reason to protest,” Aziz said, sipping coffee with friends during a break from work.

“But I think Ahmadinejad will stay in power. He has the support of (Iranian supreme leader Ayatollah Ali) Khamenei.”