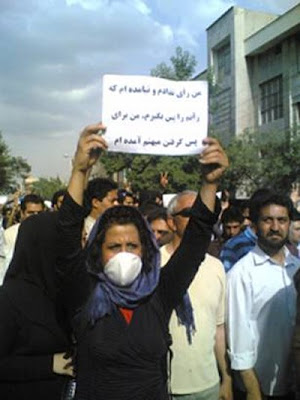 An Iranian woman carries a sign reading, “My vote did not count. I’ve come to take mine back.” (Iran Press News)

The regime in Iran crushed the latest democracy protest on Monday with bullets and tear gas.
The AP reported:

Riot police attacked hundreds of demonstrators with tear gas and fired live bullets in the air to disperse a rally in central Tehran Monday, carrying out a threat by the country’s most powerful security force to crush any further opposition protests over the disputed presidential election.

Britain, accused by Iran of fomenting post-election unrest, said it was evacuating the families of diplomats and other officials based in Iran — the first country to do so as Iran’s worst internal conflict since the 1979 Islamic Revolution escalated.

Witnesses said helicopters hovered overhead as about 200 protesters gathered at Haft-e-Tir Square. But hundreds of anti-riot police quickly put an end to the demonstration and prevented any gathering, even small groups, at the scene.

More… An Iranian protester pleaded with the US and world to intervene today.
He forgot Obama was president.